For Ballast with Smart Flow Sensor, please check for UV-55W-FS on the search bar.
Great after-sales customer support: 30-day money-back guarantee. Extended manufacturer warranty. Lifetime tech support from Bluonics in Sacramento, California, USA (888) 207-8939
Connect to one of our technical specialists to help you with production selections. Call us at (888) 207-8939 or contact us here https://www.bluonics.com/pages/contact-us. 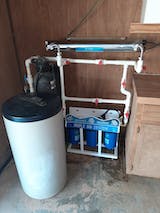